Echidna rescues often involve a road casualty or an echidna that has encountered a dog or person. Before trying to move an echidna, ask yourself is it necessary. If there are no apparent signs of injury, it may not be necessary to remove it.

Echidnas injured by cars MUST be taken to a veterinary clinic at the earliest opportunity as it is impossible to properly assess any damage to these animals without X-ray.

If you find an echidna in a backyard, it is best not to remove the animal but to let it move in its own time. If being pestered by dogs, request that the owner lock up the dogs until the animal moves of its own accord.

ECHIDNAS ARE  PROTECTED in all States and Territories of Australia. If an echidna is in danger i.e. on a road or being threatened, then move it away from the danger.

Never use a shovel or try to force an echidna out of hiding with high pressure water or pointed implements. These could injure the animal. On soft surfaces, approach the animal from behind, attempt to slip one or both hands under the shoulders and legs, then relax. 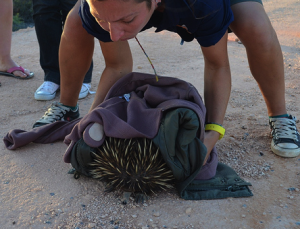 When the echidna relaxes, gradually push further under the soft underbelly. When you have a firm hold, lift and place the echidna into a container with a firm lid and air holes. Do not use a container with plastic slats on the side as the animal is likely to force it beak through the holes and injure itself.

On hard surfaces (e.g. a road), use a rubber mat from a car or an old coat. Wedge the mat as far under the echidna as possible. This usually moves the animal enough that it is possible to gently roll the echidna on to the portable surface and carry it off the road or, if injured, place the animal in a container.

NEVER pull, lift or hold any echidna by their hind feet or extract them with tools. Handling in this manner can cause hip displacement plus abnormal strain on both the leg and stomach muscles.